Top of the World

As 2017 draws to a terrifyingly too-soon-close, we take to the backcountry for some Coastal Mountain ski-touring.

Just like last New Year, we head to Lizzy Creek cabin, a total gem, with a heck-of-a-tour in – 14 kilometres to be exact. In theory, that’s not really that long, but we hit a few hiccups. Our packs were heavy (5 days of food, avalanche gear, camping gear etc.) and the logging road portion of the trek was overgrown with alder. We. Were. Slow. 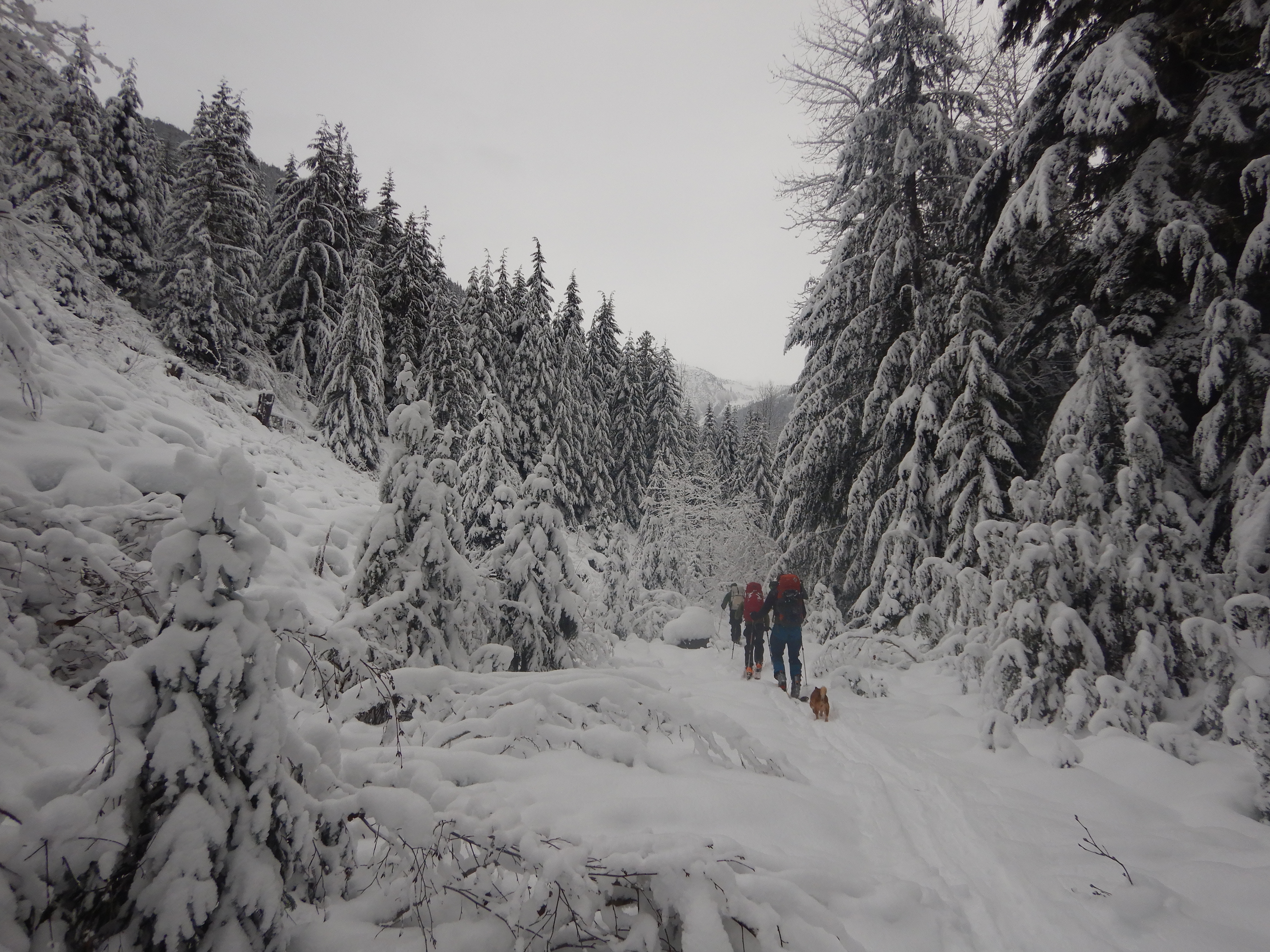 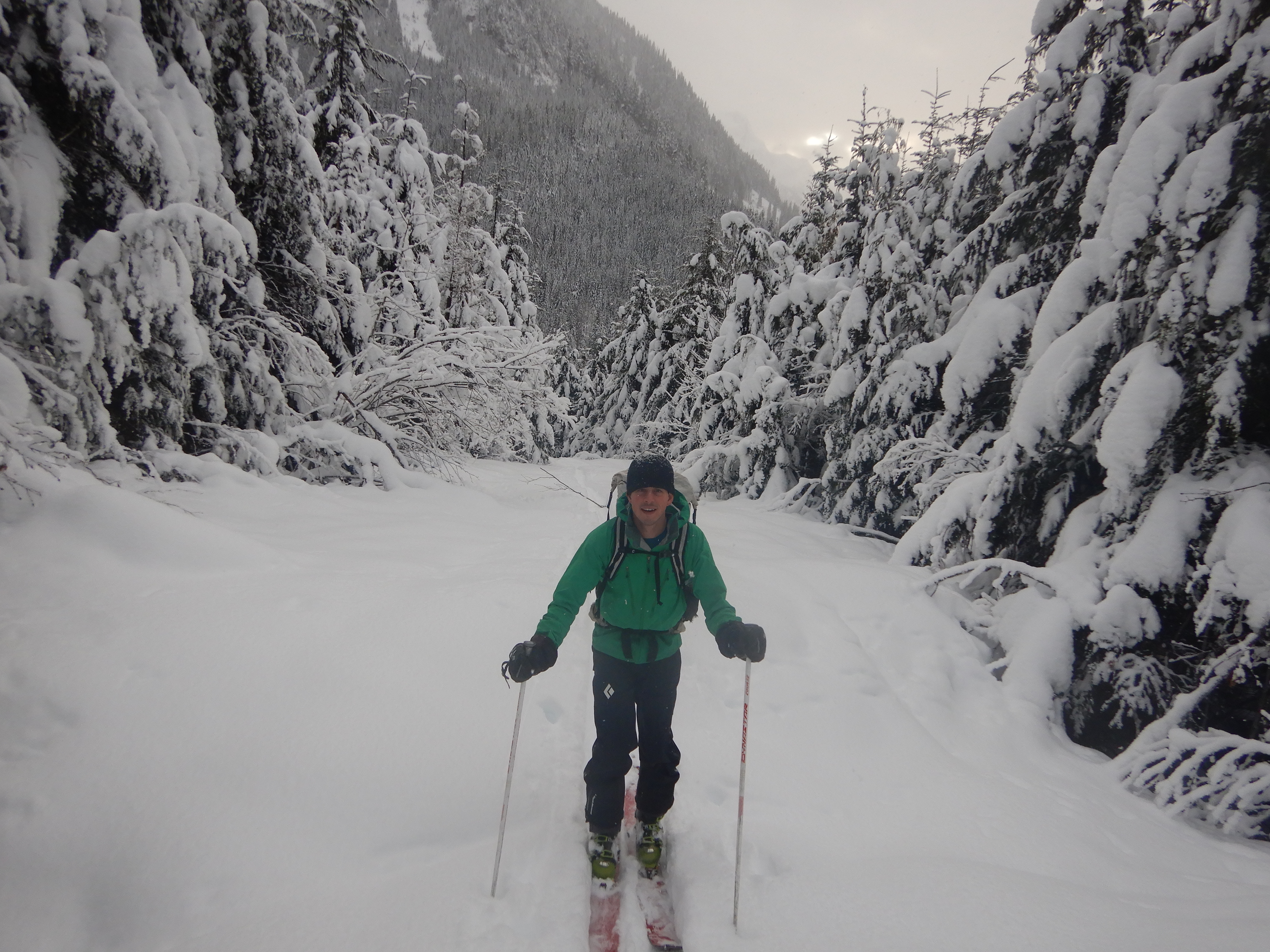 9.5 hours of sweaty, panting, snow trudging. I’m beginning to notice a bit of a theme in my circle of adventurers: EVERYTHING is harder, and will take longer than anticipated! To be honest, I’ve noticed this for about a decade, but it hasn’t stopped me from joining in on the (type-2) fun. I think of myself as a fairly sporting gal in regards to outdoor adversary, and I know I am strong and capable.

“Strong and capable…strong and capable,” I repeat over and over as a mantra in my head, as we are (apparently) just 20 minutes from the cabin. One of our team members had a wee mishap with Lizzy Creek, resulting in becoming drenched from the thighs down, so we have to boogie! Strong and capable indeed…

As always, the cabin is a welcomed site. I howl with excitement – we did it!

There’s no wood. Our work is not done. So we remain in our ski boots for another 30 minutes and gather deadfall near the cabin, post-holing waist deep in pow. As I sink in the white stuff, I feel like the snow is killing me, but remind myself that tomorrow we will be friends.

Over the 4 days we spent out there, we got a minimum of 50 centimetres of snow. The snow-gods were feeling festive! Day after day, we pulled on our packs, clipped into our skis, and began skinning up among the trees, the alpine, and ultimately, the top of the world. What a treat. We also put in a huge evening effort to fall some dead-fall, chop her up, and restock the wood supply. So worth the effort! We had that fire blazing. 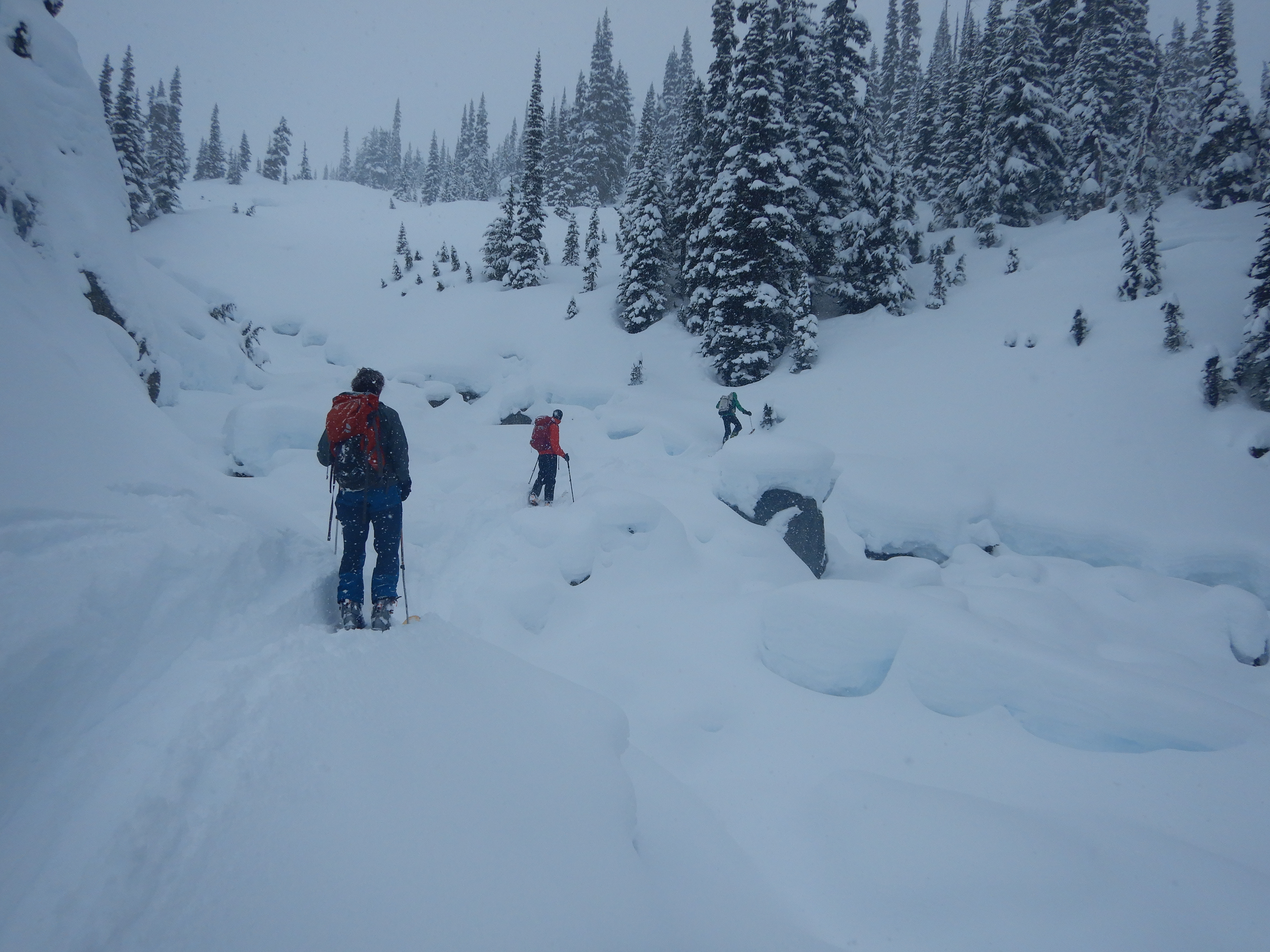 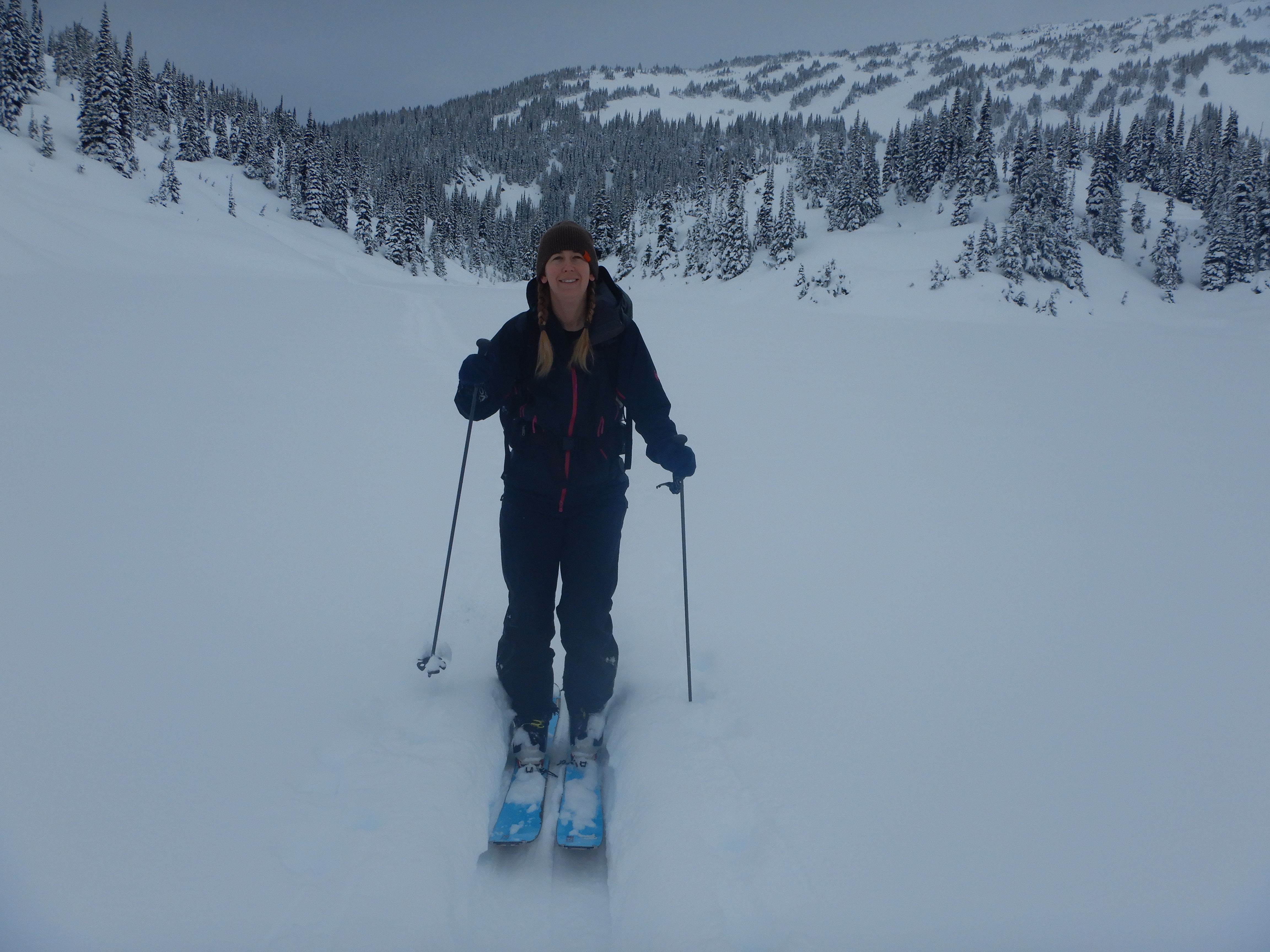 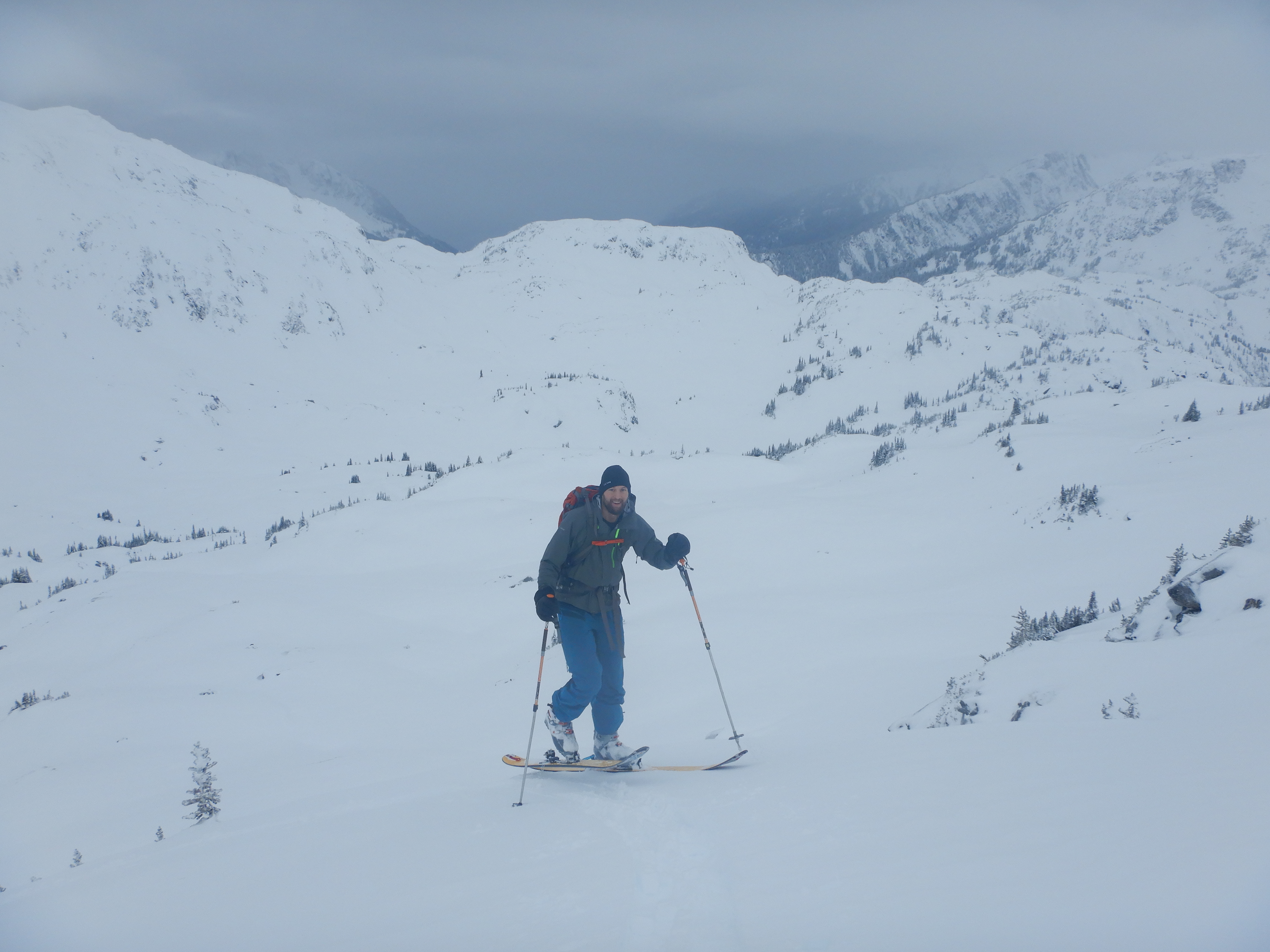 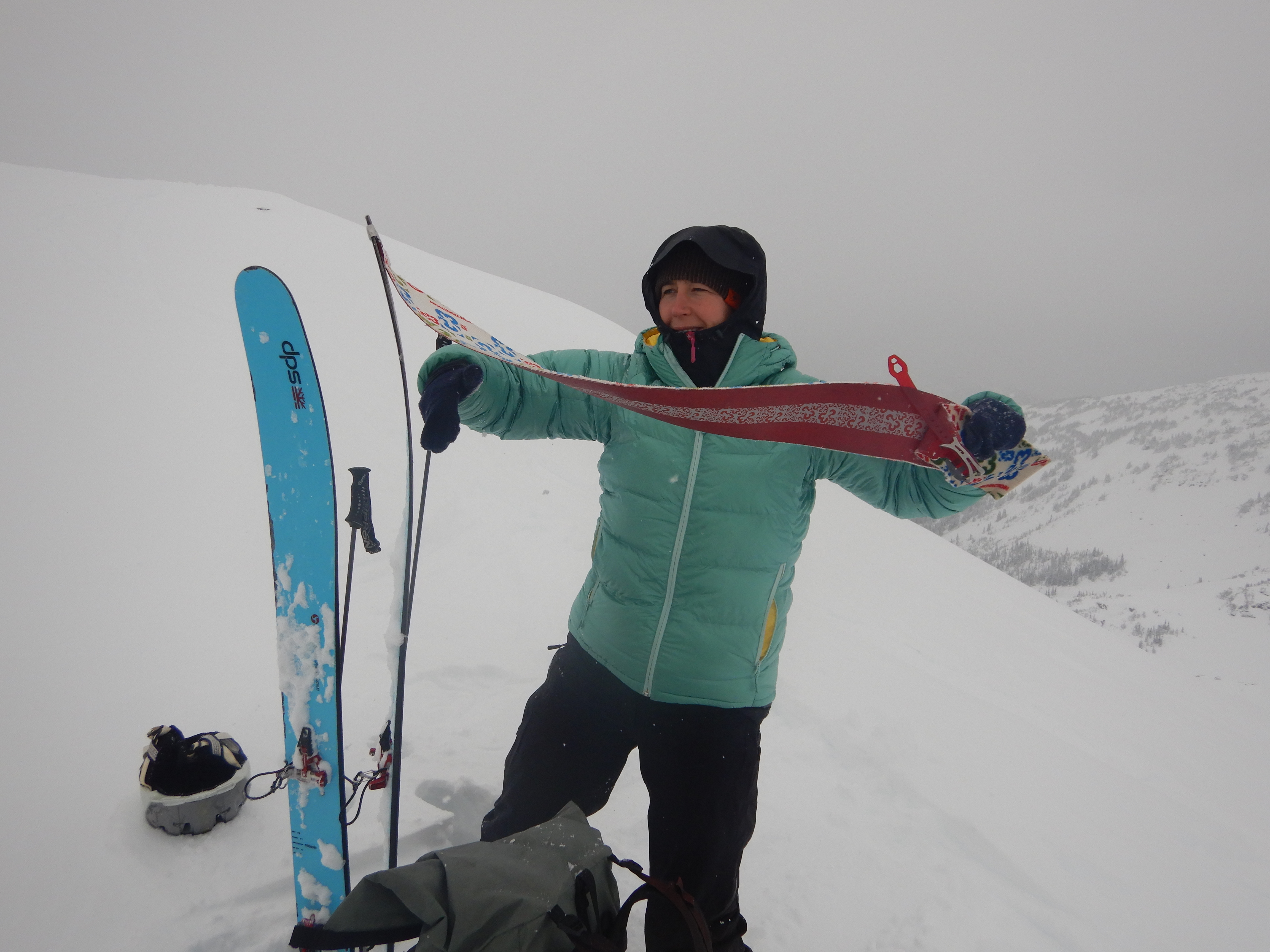 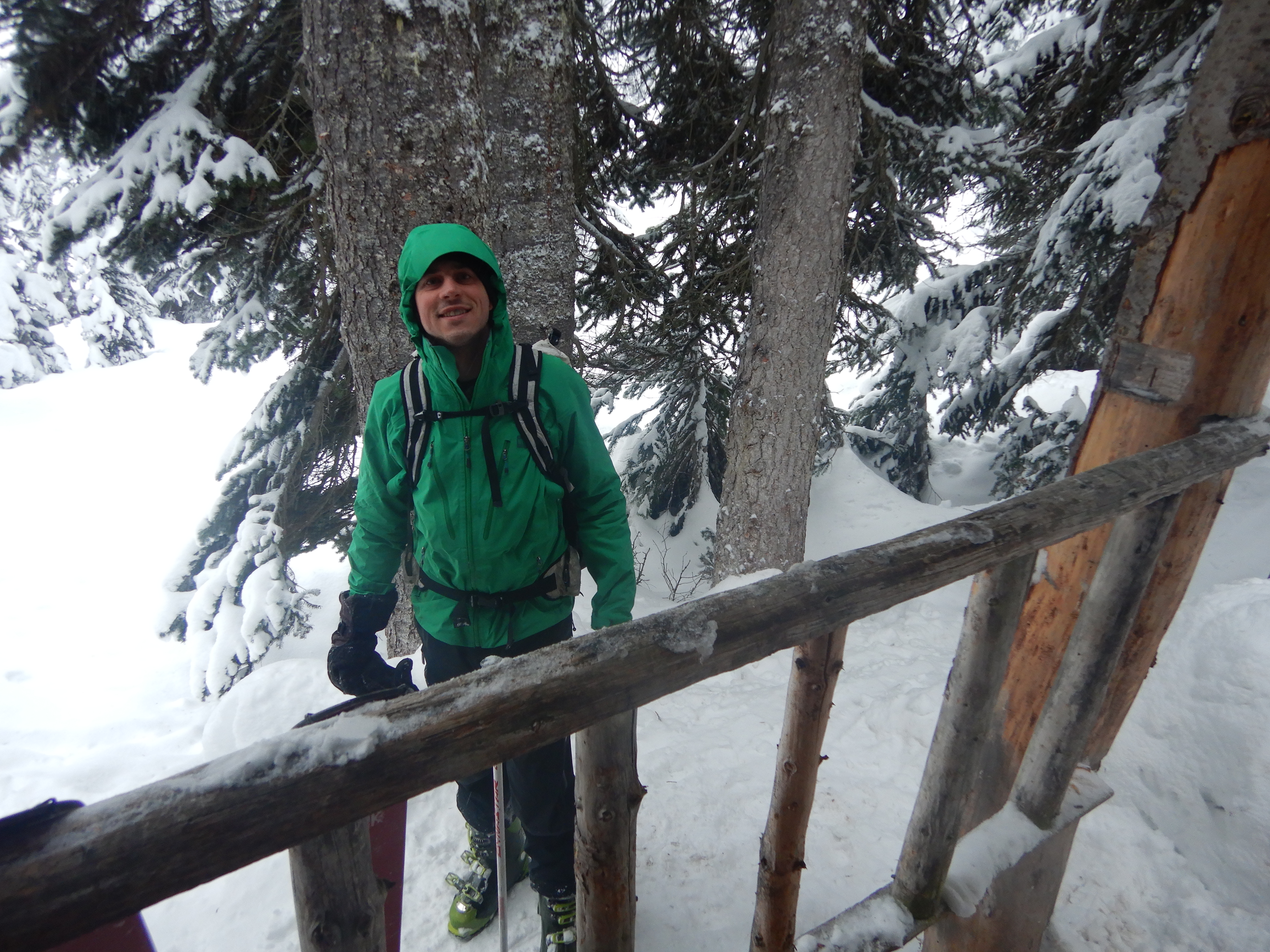 The initial plan was for 3 more friends to join us at Lizzy cabin on the 29th – 3 days into our trip. Luckily Dan brought his Delorme InReach along so we could communicate the conditions of the trek in. 9.5 hours was sounding rather daunting for the others (and I don’t blame them!), so that plan was scrapped. We decided to head out a day earlier than expected to do a day trip with the rest of our party. 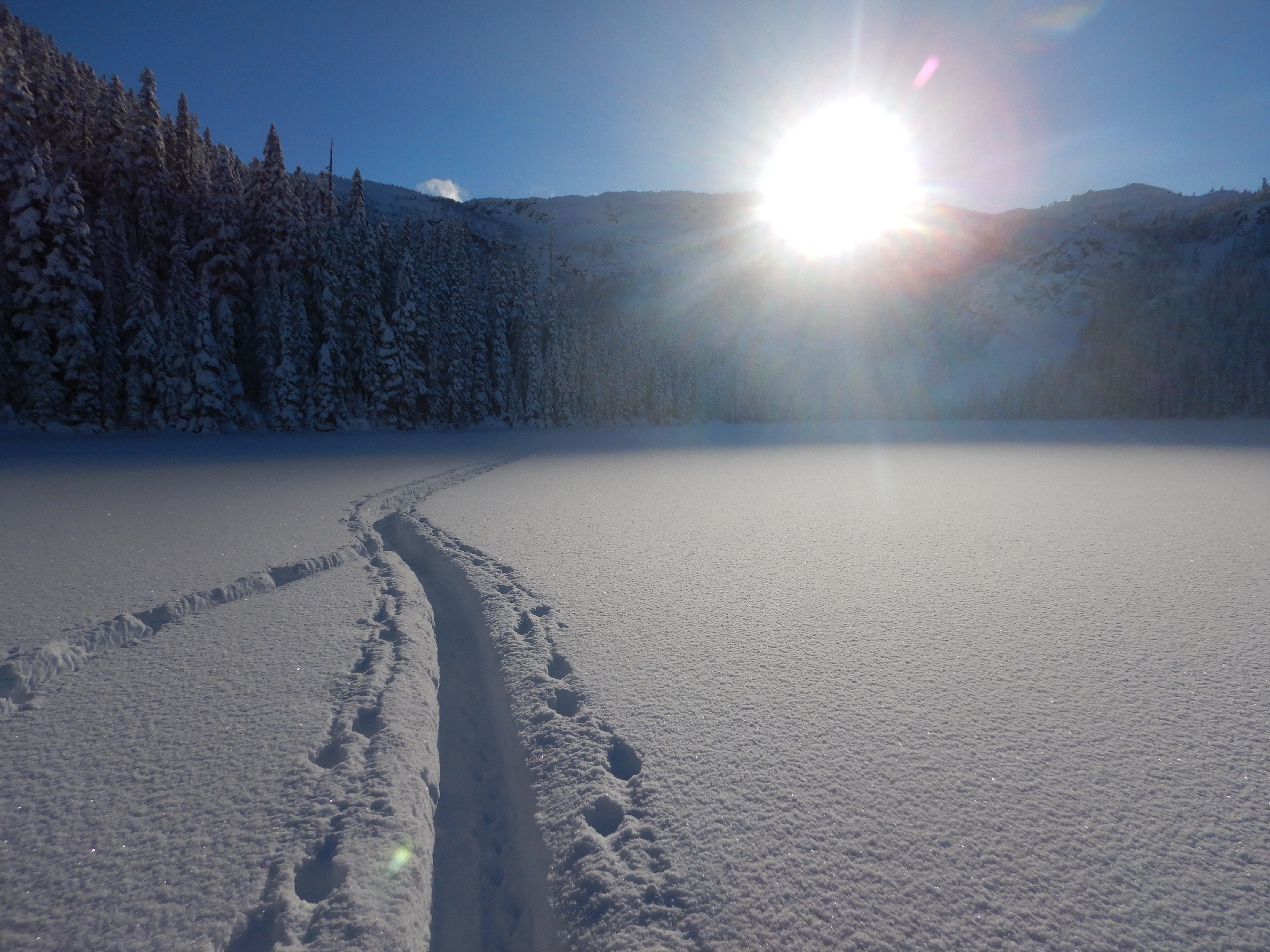 As we skied out to our van Tic-Tac, we continued to discuss the possibility that we would be snowed in. We parked on a FSR road, that would definitely not be plowed. Sure enough, our van was buried in snow, and the road was blanketed in 1.5 feet of snow. Exhausted and anxious to get to Vancouver (shower anyone?!), we dig out our avalanche shovels and get shovelling. And shovelling. And shovelling. 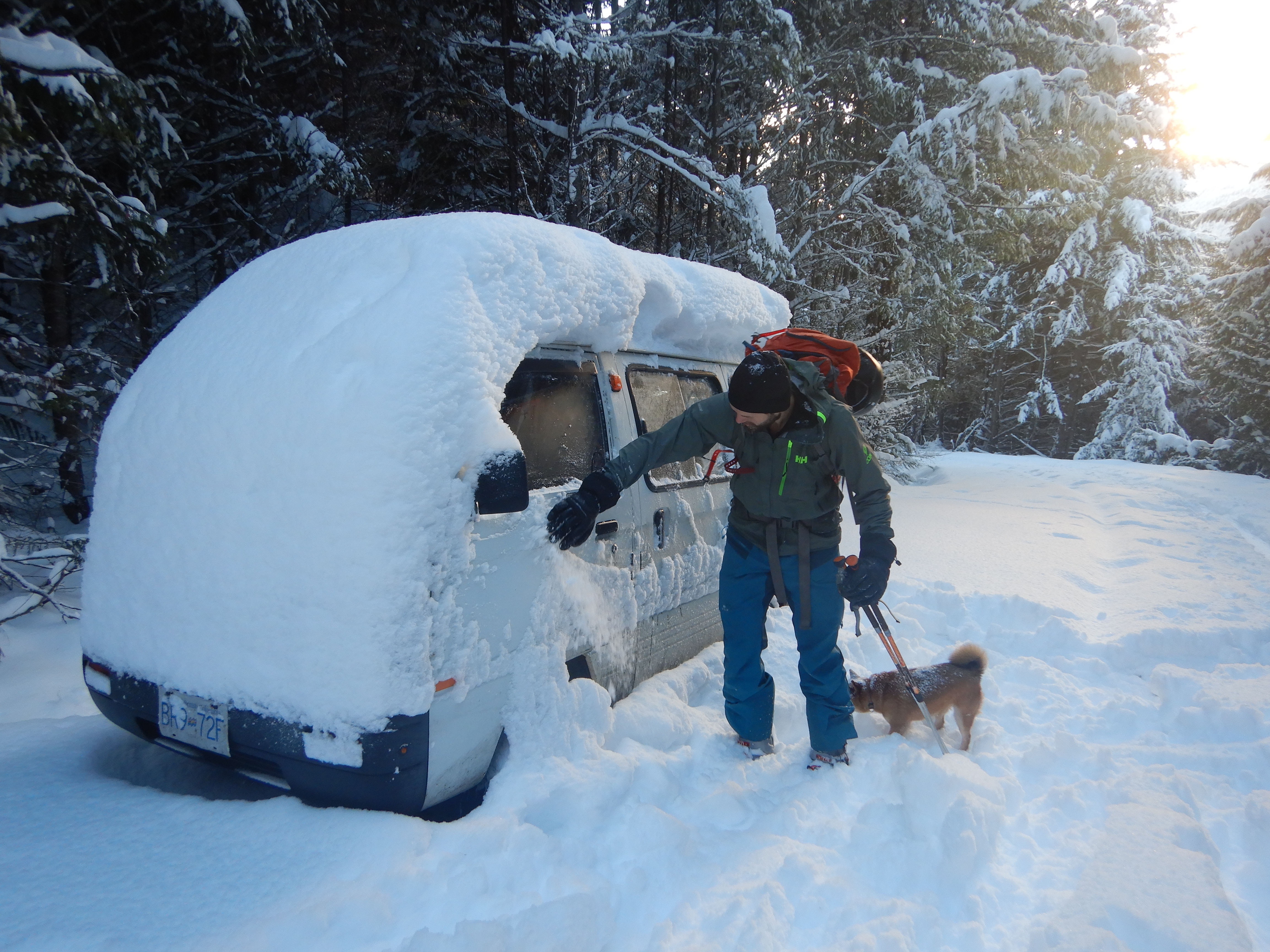 We had a rhythm – shovel the car out, clear a section of 20 feet, push the van to get him moving, and pray that he makes it further than our shovelling! If it was down-hill, we’d make some progress. Flat…not so much. It was gruelling. It was getting dark. Completely dark. Headlights on. Keep at it.

All throughout, I kept my ski boots on for fear of getting frozen feet if I switched to my running shoes. My toes were KILLING me, and eventually I caved and decided I needed to relieve the pressure. I just about lost it when I looked at my big toes – they were throbbing, purple, and I could feel the blood gushing under the toenails! I was in so much pain that I was unable to get any shoes on, and completely let my team down by remaining in the van for the remaining 4 hours of digging. I was literally HOWLING with pain – as if my feet were in a perpetual thaw. Unbelievable!

6 hours later, we emerged onto In-shuck-ch FSR – an icy, but (mostly) plowed road. I was so proud of Dan and Justin! As if they just hand plowed a road! Tic-Tac continued to flail his way down the road, spinning and sliding and refusing to make it up the inclines. Someone in a huge pick-up truck took pity on us, and followed us for the remaining 10 kilometres, and towed us up when needed – a grande total of 6 times to be exact. What a life-saver!